Ketamine is a rapid-acting antidepressant that is FDA approved as Spravato for depression and suicidality. It was developed in 1962 and FDA approved for anesthesia in 1970 as a human drug first and foremost. IV Ketamine has been found to be effective in rapidly reducing depression and suicidality. It is generally given in a dose of 0.5 mg/kg IV over 40 minutes and produces remission or rapid depression reduction within several hours to days in 70% of treatment resistant patients (ones who have failed several medications, ECT, or even TMS).

Why Use several ketamine infusions?

It improves response and lengthens time to relapse of depression:

At NOVA Health Recovery Ketamine Infusion Center, we utilize home based ketamine treatments after the initial series of infusions to maintain response and prevent relapse. Recall that ketamine infusions are frequently used in difficult-to-treat cases that have had long mental health journeys, and ketamine represents a viable option of improvement in mood and functionality whereas other options have failed. Recall the STAR*D Trial that demonstrated poor outcomes for each failed step of therapy in depression:

Acute and longer-term outcomes in depressed outpatients requiring one or several treatment steps: a STAR*D report 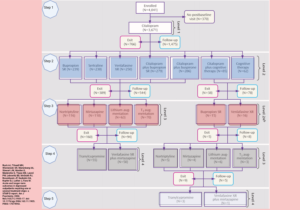 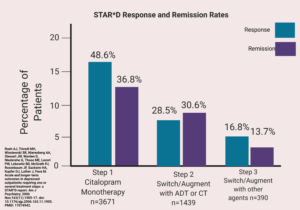 IV Ketamine Therapy is Highly effective for the treatment of resistant depression based on several meta-analysis:

Ketamine and Other NMDA Antagonists: Early Clinical Trials and Possible Mechanisms in Depression 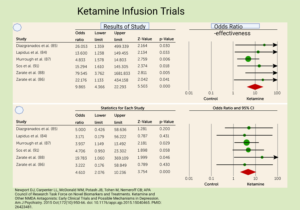 A recent meta-analysis also demonstrated efficacy of ketamine in depression:

A systematic review and meta-analysis of the efficacy of intravenous ketamine infusion for treatment resistant depression: January 2009 – January 2019

This meta-analysis included  twenty-eight studies in 35 publications. “A strong ketamine effect was observed within 4 hours following a single infusion, and peaked at 24 hours. Ketamine’s effectiveness was still present, yet somewhat diminished, 7 days post-infusion. Multiple infusions resulted in an enhanced and prolonged ketamine effect.”

Efficacy of ketamine for major depressive episodes at 2, 4, and 6-weeks post-treatment: A meta-analysis

This meta-analysis evaluated ketamine therapy for Major Depressive Disorder (MDD) at 2,4 and 6 weeks post-infusion. The meta-analysis observed large effects at 2 weeks (g = −1.28), 4 weeks, (g = −1.28), and 6 weeks (g = −1.36) post-treatment. This analysis showed that  ketamine can be an effective pharmacologic intervention for major depressive episodes, with treatment effects lasting up to 6 weeks post-ketamine administration, which has many positive implications for treatment,

The Real question is how to prolong the effectiveness of ketamine?

Thus far, the best option is with booster infusions. Generally, between every 2-4 weeks, a repeat ketamine infusion may be effective in maintenance of remission for MDD. A recent study below addressed the utility of repeated ketamine infusions for relapse prevention in MDD:

Other considerations to maintain efficacy of ketamine infusions is to utilize ketamine as home-based intranasal and oral ketamine troches. One study below demonstrates repeated oral ketamine can be effective in out-patient treatment resistant depression:

This study included 32 adults (aged 22–72 years; 53% female) with chronic suicidal thoughts that  participated in the Oral Ketamine Trial on Suicidality (OKTOS), an open-label trial of sub-anaesthetic doses of oral ketamine over 6 weeks. Participants began with 0.5 mg/kg of ketamine, which was titrated to a maximum 3.0 mg/kg. Follow-up assessments occurred at 4 weeks after the final dose. They utilized the Beck Suicidal ideation scale as a primary measure.

Daily oral ketamine for the treatment of depression and anxiety in patients receiving hospice care: a 28-day open-label proof-of-concept trial

The above article is a review of oral ketamine as well.

Finally, ketamine infusions can be used at the beginning of depression therapy to make initial antidepressant therapy more rapidly effective.